Interaction of moves of the programmed machines with the sound of traditional buddhist sutra chanting. PW20/LW is a robot built for an automobile industry. Its goal is a car body painting.

The machines are produced by Nashi-Fujikoshi corp. in Toyama. Sound of chanting Sutra in front of Buddha Amide was recorded at Nishi Hongwanji, central temple of the Buddhist sect Shin in Kyoto.

"Features": Mechanical repeating of pre-programmed prayers. Cybernetically ritualized moves of motors. Industrialization of religious behavior. Idolatry of technological processes. Increasing of number of images causes their diminution. Appearing to disappearance. Everything exposes Nothing. 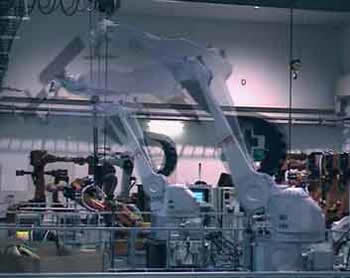